Napa. Been there done that.

But at least with my foster family from Early Alert Canines they went to only wineries!  Come on people. Even I know Napa=wine.

So the mom and the dad have never been to Napa before. Can you believe that? They say they are foodies and wine people.  As if. It’s kinda sad that their daughter’s diabetic alert dog has been there before them. Whatever. I am just more hip than they are. They get out a lot, just not to the cool places.  Like Napa.

Anyways. After dinner the first night the mom and the dad decided to go to a tap room called Napa Smith. Um. Ok. The girl is really good at going with the flow. I guess I am too, but really?  Do I have any other choice?   So yeah, it was a good thing I was there because the girl was going too high post dinner.   I needed to let the mom and the dad know. 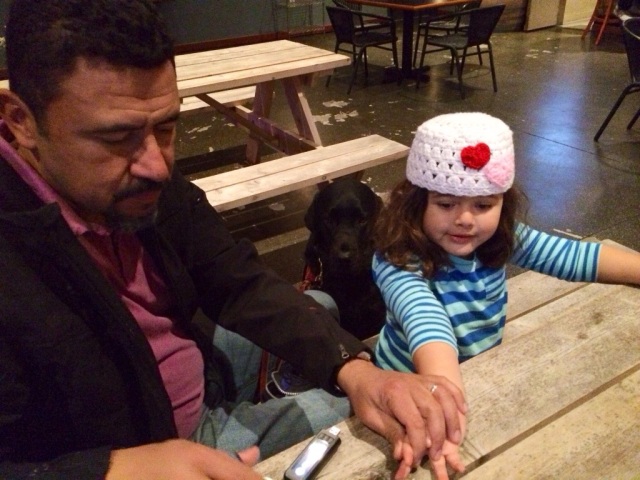 I have to give it to the girl.  She is really great about getting her BG taken all the time.  LIke, no problem.  I think she’s so used to it…it doesn’t even phase her.   Other kids are all scared.  She’s like whatever.  So yeah.  It was a good evening despite being in Napa at a beer place.  I got my cheerios.  The girl got her insulin.  The mom and the dad got their beer.   I just can’t get over the fact they went to a beer place in NAPA!

Anyways, the next morning after breakfast the mom and the dad and the girl and I all piled into the SUV. Off we went down the road until we found a place that was doing tastings of champagne. (or shall we say Sparkling Wine?)   Um. This was still before noon. Isn’t there some rule about drinking before noon? I bet the mom said to break that rule since it was champagne.  She’s a rebel. Sometimes.

So we went to the place called Domaine Chandon. It was a rather swank place. The people were all very nice to me.  They were super impressed when the mom and the dad told them what I do to help them manage the girl’s T1D.  I like people who are impressed by me.   The mom and the dad seemed to like the place a lot. I had to alert post breakfast that the girl was a tad too high.  Score!  Cheerios.   Hmmmmmm, I wonder if Cheerios has a tasting room????  General Mills, take note here……Million.  Dollar.  Idea.  Well, at least five buck idea.

Ok, so after the mom decided to buy a bunch of cases of “bubbly” we headed up the road. The girls BG was dropping fast by this time so they knew they need to get lunch. Thanks to Yelp the mom found a cool little roadside stand that served burgers called Gotts.. I like these kinds of places because there is usually food on the ground. And there was! GRRRRR….as always the mom told me to leave it. Ugh. She needs to just let me eat the stuff off the ground sometimes.  They say it will build my immune system, right???  Whatever, with my luck I would probably get a french fry stuck in gut.  Oh well, wouldn’t be my problem, and I bet it would be worth it.

Anyways, for some reason the burgers took a long time to come and I had to keep pawing the mom.  It was raining outside. My paws were wet and dirty. I don’t care. Well, I do but the mom knows an alert is more important than a clean pair of pants! For sure!  I kept the girl above 75 by letting the mom know to give her a glucose tab. 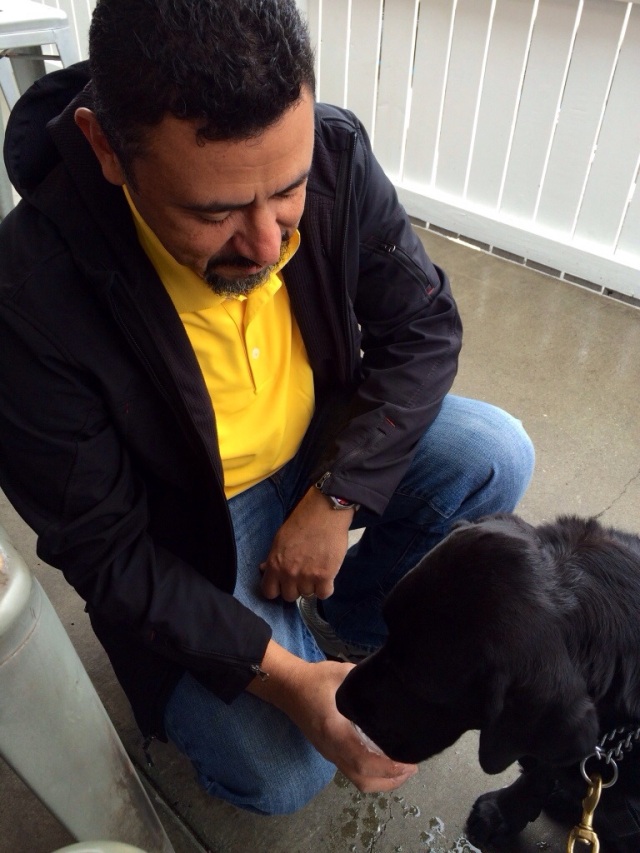 I want to share with you how much the dad loves me.  He knelt down in the rain, to give me a cup of water.  Take note!  This is how a dog should be treated.    I appreciate it.  Just don’t tell him.

After lunch the girl begged to go to some winery that is a castle. A waitress at Grace’s Table told the mom that the girl would like it.   So the mom and the dad took her there. (They really love the girl) And they took me there. (They like to torment me) And let’s just say the place was “interesting”. The girl kept asking where the princesses were. I think she confused the place with Disneyland. The mom and the dad kept asking where the good wine was. I think the mom and the dad confused the place with a real…decent winery! Oops, was that out loud?  Whatever.  I stick with my statement.

Speaking of that. During the “tasting”, which the parents said was more torture than anything else, which is appropriate since they were in the dungeon of a castle, the girl was given some grape juice. The girl wanted to be all fancy too so she swirled her juice and took a big sniff.  Like a sniff I would take when I’m picking up on a low or high BG! The mom asked, what it smelled like………

OMG. The girl is smart. She quickly stated and gestured the juice smelled like two buck chuck! The mom and the dad totally lost it laughing since I think that’s what they were thinking…. I think the poor sap behind the bar didn’t know what was going on. And that’s a good thing.

The castle place was awful. Well, except that the girl LOVED it.  She was running around looking for clues, and princesses, and adventures.  I was looking around for food.  No luck.  They did have a bunch of chickens and ducks and geese out front. They tried to come after me. They didn’t understand I wanted nothing to do with them. Unless of course they were cooked. And de-feathered.  And presented in a civilized manner.  Whatever, don’t judge.  I am a sophisticated dog.  If I could, I would dine on crisply ironed table cloths, out of a sterling sliver bowl.  I am THAT sophisticated.

Anyways, I was so relieved when we left the dumb castle and headed to another winery. Or as the mom said, headed to a “real winery”. Some place called Sterling. They said they had good wines. And a gondola. For the girl. Um. A gondola. Do I look like a dog that would appreciate a gondola ride? Actually. Yes! It was fun. The mom kinda got freaked out but not me. It was a nice view of the entire valley.

The people at this winery were awesome.  They LOVED me.  Any why shouldn’t they?  I rock.  And I make the girl and the mom and the dad more interesting.  Not just the dumb farmers they are.    Well, farmers with college degrees.  Successful farmers.  So I guess they aren’t dumb.  That was harsh.  They have me, so they must be pretty smart. OK, no more trash talking.  For five minutes.

The view from the top of this place was ahhhh-maazzzzz-inng.  Even with a rainy day it was pretty awesome.  The girl and I take good photos together, so here you go.  And no, she wasn’t drinking wine.  She was  just holding the moms glass.  At least that’s what we are going with.

Since the mom and the dad wanted to really relax, they did some fancy wine tasting where one sits down…..and chills.  The girl got right into the swing of things and did some tasting of her own.  Sparkly pinot noir juice.  No alcohol.  She looks like the real deal though.  I think anybody who dates her is going to be in trouble.  Seriously.  In more ways than one…  But yeah.  Seriously.  Watch out.

I was pretty happy after the girl had a bit of juice.  She had been running a little on the low side and I had been alerting like crazy…..so this and a couple glucose tabs kept her right in range.  And what do I do when she is in range?  Sleep.  Yes.  Sleep.  In the middle of a winery.  No problem.   The mom said we would chill.  I just am a good listener.

We got to ride the gondola back down to the valley floor, and the mom said we had to take pictures in front of the pretty flowers.  Um.  OK, whatever.  The girl is crazy in photos.    I’m done with photos. 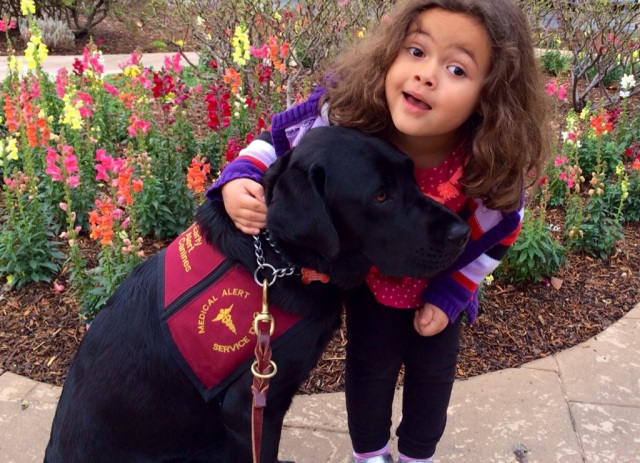 Then we took off to another winery.  Yes.  Another winery.  And this one was way in the mountains.  And the mom got us all lost.  LOST.  With no cell reception.   Finally they just retraced their path and made it back to the main road and started all over again.    In the mean time, I could tell that the juice the girl had made her TOO high…and the mom didn’t give her enough insulin.  So, it was alerting in the car time.  Sure enough, too high, correction needed.  Darwin to the rescue.  I rock.

So we FINALLY found our way to the Hess Collection winery.  BONUS, there was an art gallery there too.  I love art.  I am art.  I appreciate art.  I appreciate me.  Whatever, any gallery in the world would love to have me as part of their collection.  But I digress…

This art was pretty trippy.  Aka modern.  The mom LOVES this kind of art.  I on the other hand, got blamed for it!  The dad and the girl thought it was really funny to blame me.  Um.  If I could have, I would have really dropped one right there.  On their feet.  But I know better.

We turned the corner, and found this piece of “art”.  I don’t get this one.  This looks like the dirt in front of the ranch’s work shop.  The dad kept muttering that he was an artiste! Um, no.  You are a farmer.  We’ll, farming is an art, so maybe he’s on to something.

We all really liked the piece below.  I’m not sure what it was called, but it was just cool.  I think I heard the mom mention she was going to try to recreate it at our home.  Yeah, you go right ahead and do that.  It will look like garden scraps.  Whatever.  I’ll have to post a picture when the mom tries this.

The mom and the dad took us to a nice Italian restaurant after the mom bought a TON of wine at this last winery.  I think the mom and the dad like wine a lot.  Good wine.  Not castle wine.  Anyways.  The mom likes wine, but at dinner she and the dad didn’t order any!  I think they were wined out.  I can’t imagine not wanting more of something that I love.  Give me a whole bag of kibble.  I’ll eat it all.  And ask for more.  Seriously.  But anyways, the dinner was uneventful.  No highs, no lows.  I just got to sleep under the table.  The waitress didn’t even know I was there until we left!  Yeah, I rock.  EAC rocks.  GDB rocks.  The original girl and mom rock.  But I rock the most.

The day was a full one.  But a good one.  And as all days do, this one ended with a blood glucose check.  And a beer for the mom and the dad.  ARGH, these people are just weird. 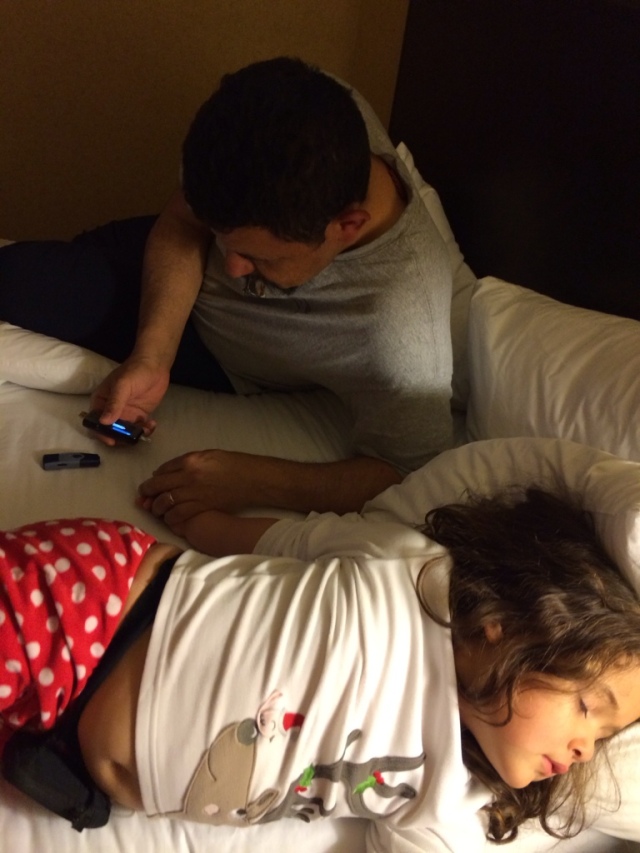 4 thoughts on “Napa. Been there done that.”